Hello once again! I’m back with another installment of expat blogger interviews. You thought I’d forgotten or given up on this, didn’t you? Nahhh. Expats are just a particular bunch of bananas. And toss in the ones that blog, too? It’s like herding well-fed cats, I tell you!

Today, I’m happy to introduce Audra who I’ve known for years. In fact, in my attempt to figure out how long we’ve known each other, I went back through email archives and the earliest I found was 2014. She’s a soul sister. I hope you adore her as much as I do.

// Where are you from and where you do currently live?

I’m originally from Texas (actually born in Seattle, but when you’ve lived in Texas for more than 15 years, you just kind of morph into a Texan), and I’m currently living in South Korea. I live just outside Seoul in the surrounding province of Gyeonggi-do. It’s about a half hour subway ride to Gangnam.

// What other countries have you lived in and which ones do you want to live in next, if any?

Before moving to Korea, I spent a year in Taiwan teaching. It was a really great first overseas living experience, and it was where I developed a love of teaching and all things Korean. After I returned to Texas to finish school, I planned to go to Korea as a teacher, and that’s what I did!

I’ve been in Asia a total of nearly 3 years now, counting my time in Taiwan. I’m going to spend at least one more year in Korea, but I’d like to try something different next. If I had my way, I would move to Scotland or Iceland; those are the next places I really want to travel to, but it would be fun to live there too!

There are pros and cons. I’ll start with the cons. Living in Asia is hard for foreigners in some ways, easy in others. Because Asia is very homogenous, anyone of non-Asian descent sticks out. It’s hard to fit in, and while Asia treats foreigners very well for the most part, it can be depressing to realize that no matter how long you live there, and no matter how well you speak the language, you will always be an outsider.

Things are more difficult living overseas because so many things are unfamiliar. I can cook fine here, but it’s difficult or nearly impossible to find some of the things I miss from home. Cinnamon rolls in a can, for starters. You learn to love other foods just as much, but when you’re craving that certain something, it can be tough when you know you won’t find it. (It’s the same in reverse too; one you find something Korean you love, it would be sad to be in America and not be able to find it…)

The attitude towards certain things in life can be difficult to swallow too. For one thing, people in Korea are very open about sharing details of their lives with coworkers, something I just can’t get my head around. I’m used to environments where work was work, and asking how your diet was going or if you were dating and if not, why not, was considered unprofessional. I understand that this is how some people show their affection or concern, but I would hesitate to apply that as a blanket statement, when I have seen the answers to those questions pandered as gossip. Gossip that would make me very uncomfortable. So closeness and privacy are treated differently here, and that has taken some adjusting.

It’s also quite inconvenient without a car. I would be terrified of driving, since driving rules and etiquette are so different in Korea. The public transportation system is amazing – clean, easy to use, extensive – but when you want to bring home more than two armloads of groceries, it gets prohibitive. 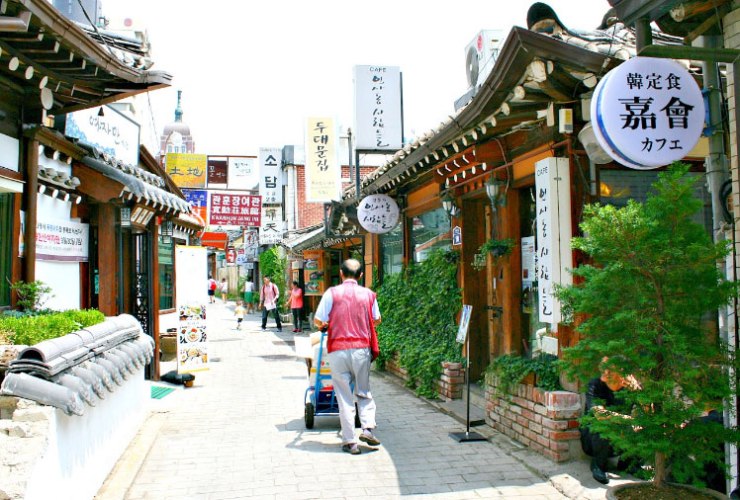 Now, the pros. I love living abroad, despite the difficulties. After all, even living at home there are things I don’t like. Pick the sh*t sandwich you want to eat.

I particularly love what living overseas has done for me as a person. You hear about the narrow-minded ignorance of Americans, and in many cases, that’s true. I don’t believe it’s only Americans, though. Every person who only knows their own world is narrow-minded in some way. Travel naturally broadens the mind and exposes us to different people and cultures. I have become far more compassionate, far more wise, and far more myself in all of this. Only when we compare ourselves against many different backdrops does our true belief and value system become exposed. I had someone ask of me, somewhat derogatorily, in my mind, what I was looking for in being away from home. Yes, I was looking for myself, and I don’t believe you can find it by staying home and doing the same things that all your friends do day in and day out. You can find one shade of yourself that way, but to get the full spectrum, you need change. So I’m finding myself, as silly as it may sound, and should I ever go back home for good, I will be a much better, kinder, richer person than before.

Travel does that. Living overseas is even better than travel, to me, because you get past the happy honeymoon, glamor phase of a new place and get to see the flaws as well, which only helps in understanding.

I also love, love, love Korean food. That’s one of the reasons I fell in love with Korea in the first place. I also love the urban lifestyle, though I know I won’t want it forever. And when it’s not making me uncomfortable, I love standing out as a foreigner. Who doesn’t want to feel like a celebrity every now and then?

I think overall lifestyle. Back in Texas, a place so big you can travel for hours and only come to the next big city, you do have to have a car. It’s very, VERY hard to live without one. In Korea, it’s no problem (aside from the aforementioned grocery haul). Buses, subways, taxis; all ready to get you anywhere you need to go. And you can walk anywhere as well. That was totally new to me. In the suburbs, you can walk in neighborhoods and maybe down to the gas station, but that’s unlikely in Texas. Most towns just aren’t built for pedestrians.

I really enjoy walking everywhere. I feel more connected to the people and the place. It was a huge change for me though, and it was hard to adjust my feet to walking miles every day. Great for health though!

Aside from friends and family? Wal-Mart. I say it jokingly, but I’m half serious. I miss old familiar places where I know exactly what to do, how to do it, and where to go. I miss Hobby-Lobby, with its vast array of crafty supplies. I mostly miss the conveniences and familiarity of home. It’s not that Asia is so completely foreign, but just that it’s not home. I also miss cinnamon rolls in a can.

I already mentioned it before, but I feel like as a human being on planet Earth, I have gained a deeper insight into how big, and yet how very small, this world is. It’s one thing to read about other cultures and feel removed, but quite another to live in it, and realize that though the surface looks alien, underneath the motives, the heart, the soul, and the spirit are the same.

Weekdays when I’m working, I wake up around 6 and get ready, then head to school around 7:30 (work starts at 8, but I like mornings and I like the quiet before kids come). Once classes start at 8:30, I teach between 4 and 5 40-min classes a day, with one or two free periods to grade and plan. Kids leave at 3:30, and then the remaining time until 5 is spent in meetings or more planning. As a homeroom teacher, I’m responsible for a lot, including communicating to parents and thinking of projects and goals long term.

After work I get home by 5:20 and usually don’t go out again. Sometimes I’ll go to dinner with friends, but that’s rare. I like my alone time, being an introvert, so for the five or so hours until I go to bed, I usually just chill at home; reading, writing, blogging, playing video games or watching TV.

Weekends I get errands done like cleaning and getting groceries, and these days I’m trying to see more of Korea, so I’ve been going with friends to amusement parks or events in Seoul.

As you can see, it’s not very weird or out there. My daily life doesn’t look all that different than a teacher’s back home, or any other full time job. I work for 40 hours, relax at home, and go out occasionally with friends.

That’s one thing I’d like people to really know. When you live in another country, and don’t just visit there, your life tends to fall into the same pattern in might at home, unless you have a unique job to start with.

Aside from Lani, who I’ve followed since she was in Thailand, I’m really enjoying reading Liz Carlson’s blog, Young Adventuress. She lives in New Zealand, where I just visited, and her stories and pictures are amazing! She also has a guide for Americans who want to move to NZ, which just got my mouth watering…

// What’s a question you wish interviewers would ask, but never have?

I’m not sure I have a question I always with someone would ask, but I do have one I think is interesting, and it came to me because it was actually quite hard to answer the questions you did ask.

How easy is it to think about and discuss life abroad?

I read recently in Natalie Goldberg’s Writing Down the Bones, that stories and experience need time to compost in your soul. It’s often hard to get the right perspective when you’ve just moved or just lost a relative or just been heartbroken. You need time to process, mostly unconsciously. This has happened to me. I’m just now feeling like I can accurately write about life in Taiwan. I did a lot of blogging there about surface things like where I went, how to order milk tea, and so on, but it’s just these days that I feel like the richness has come out, and that I can get to the marrow of my time there.

It will be like this for Korea too. I’m living here now, and my vision is narrow and skewed by current problems and ideas. I’ll be able to better write about what it was like when I have some distance. I can easily tell you what it was like in my first few months, but in the second year, when I was getting into the swing of things – that time is still hazy and undetermined to me. I don’t have any meaning for it yet. It’s easy to give the facts, but the heart eludes me.

Despite all that, I’m glad I had a chance to write for you, Lani! And thank you for reminding me of this awesome series and inviting me again. Love from Korea, xxoo!

Thanks, Audra! She’s blogs under her name in her own unique way, and I hope you’ll visit her there, too. Until next time…

16 replies on “Fish out of water: expat bloggers interview series #5”