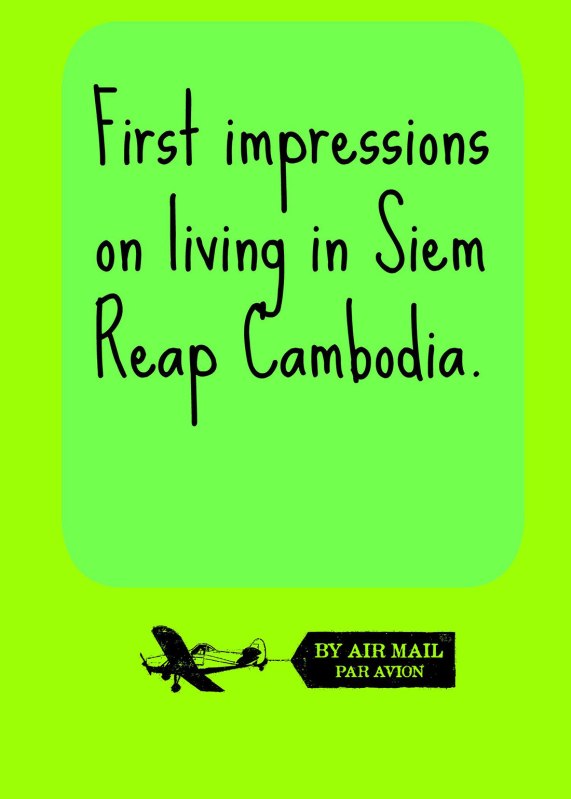 About a week before we moved to Siem Reap, I was offered a job at a reputable language school, but the difficultly for me was they wanted me to start teaching soon after I landed. So my first few days were consumed with finding food and foraging for information on where to live. Not exactly the Angkor Wat induction that most folks have when they arrive in Siem Reap.

Most tourists are here for 4 days, purchasing their 3-day Angkor pass, visiting the temples by day and wandering Pub Street by night, sunburned and soaking in the sights, smells and sounds of rows of restaurants, tuk tuk drivers vying for their business, trinket shops and other tourists in their various states of pleasure-seeking. But not me! Woe is me.

Siem Reap for visitors is a well-oiled machine mixed with the odd charm, if you can call it that, of pitted dirt roads, neglected or non-existent sidewalks, and regular power outages. And the tourists that come here are truly from all over the world. Even though I was born and raised in touristic Hawaii and lived in Thailand, a premier travel destination, I have never seen such an amazing array of people in a few short blocks. I enjoy seeing tourists dress up at night because in Thailand they have a tendency to look beach ready at all times. The downtown is a people-watching person’s dream.

I’ll admit, I’ve wondered if Cambodia was going to be very much like Thailand. It sure seemed like it from what little pictures I allowed myself to see, not wanting to ruin the surprise.  After we got off the plane, however, and even now, just a couple of weeks in, I can say Cambodia is its own unique place. You could mistake Laos for Thailand and vice versa, but you can’t confuse either with Cambodia.

First of all, after living in the land of 7-11s (Thailand has the 3rd largest number of 7-Eleven stores after Japan and the United States), walking into mini-marts have been a small joy in discovering what independent shops have to offer. Cliff Bars, Pop Tarts and Nature Valley granola bars are sold like Snickers and Mars. I spied long-forgotten Freeman hair products in a pharmacy. Mini-marts and grocery stores have a wide and luxurious selection of liquor, beer and wine. I even saw Snapple (I didn’t even know they still made Snapple) in the fridge, and then there are the blocks of mozzarella and cheddar cheeses and mini bakeries. It’s amazing, really. I was even able to nab DayQuil and NyQuil in the pharmacy, too. (Yes, I got sick, already, of course I did.)

While 7-11s are convenient and sure damn handy – Thailand expats and travellers learn to love having a 7-11 on every street corner – they are pretty much all the same. Isn’t that the point of these things? And herein lies the strength and weakness of chain stores: you know what you are getting, but you’ll always have the same choices. This phenomenon can also be said about grocery shopping at Tops, Tesco Lotus, Macro and Big C.

In SR, there aren’t many international chain stores. Apparently, KFC recently opened here. There is a Swensen’s and Pizza Company, and a BBQ [Korea’s No. 1 Chicken restaurant], and another Korean goodie, not food related, Nature’s Republic. Now, there are a few Cambodian chain stores, like Lucky Supermarket and some pharmacies, but overall (and this is going to change quickly, I think), Cambodia is free of outlet retail stores and restaurants that consume the developed world.

It’s a nice change, actually, as I’d rather support the small businessman or woman, but it’s the poor state of the roads that make me feel like I’m in a developing country. Ironically, fancy boutique hotels are situated on dirt roads dotted with potholes the size of moon craters (okay, very slight exaggeration). Not all roads are like this, which further adds to the confusion: why don’t they pave all the roads?

I’ve lived off of dirt roads and driven down my fair share of them, but these roads are different creatures all together because the dirt is red and fine and gets everywhere. On my more romantic days, I tell myself I’m living on Frank Herbert’s science fiction desert planet Arrakis, you know, from Dune. And on my less romantic days, I try not to let my inner + outer clean freak spaz-out over all the dust in the apartment.

I ride my bicycle (well, it’s the landlady’s until I can get my own) to work and let me tell you there is nothing like being engulfed in a cloud of dust every time a car or dump truck drives by. Walking is no better. Sitting in a tuk tuk is slightly better. I hope all the construction going on will result in freshly paved roads and sidewalks. When we drive down particularly bad roads it feels like we are off-roading in a horse carriage.

But SR, I’m told, is changing fast and we seem to have arrived on the cusp of change. I saw Thailand change a good deal in the 5 years that I was there. This was part of the reason why I moved from bigger Chiang Mai to smaller Chiang Rai, I don’t like congested cities and consumerism crowding my ability to live an authentic life. And no one can accuse Siem Reap of not being genuine…

Cambodians, at least in this touristic hot spot, are warm and friendly. And I’m not talking about the people who want you to buy something from (they’re sometimes not). But so far, Cambodians are quick to smile.  If you smile at them, more often than not, they smile back with their whole face. If you speak Khmer, they really light up and are thrilled that you know their language. My b/f has been studying like mad and has been able to charm his way to lower rent, tuk tuk rides and get the steeliest of grandmas and non-English speakers to smile and laugh.

Although, everyday tuk tuk drivers, restaurant workers, children, folks sitting in the dingiest shop have far superior English than many educated Thais. I continue to be surprised and enlightened by this phenomenon. I’m sure some part of this is due to exposure to English speakers, but Thailand is a well-trodden country, too.

Siem Reapers also simply have this confidence that I find refreshing. Many Thais are shy to use their English, but not here. Cambodians speak like native speakers, using words like, “so, well, actually…” and sometimes slang, like “holy shit” and “holy crap”. We’ve had to ask a few locals if they spent time abroad because their English was so good. I will have to ask my Cambodian coworkers why this is so…and get back to you.

This is not to say teaching Cambodians is all sticky rice and sweet mangos. My two weeks of teaching so far have been just a wee bit intense. I’ve walked in on a boy crying from another kid hitting him (my first day). I’ve left the room because one of the kids let out a “silent but deadly” (we all fled the room actually) and interestingly enough, in all my years teaching children, I’ve never had that before.  I’ve also accidentally flashed my students my underwear and unknowingly said a very bad word in Khmer. I wanted to crawl under my desk, but instead I put myself in the corner of the room with back towards them and willed myself to disappear (The class was laughing hysterically by this point).

Cambodians are also very serious about grammar, which I am not. As an American I couldn’t care jack-fruit about grammar, but it’s my “job” so I’ve got to be able to adapt my teaching style. Schools I’ve taught at before emphasized doing English, rather than explaining it as a subject. Right now, my life is about swimming through the choppy waters of micro and macro adjustments and I’m getting a little tired from constantly treading water.

It’s not that I don’t like it here, it’s just I haven’t had many opportunities to enjoy my new life. I’m working more than was recommended by my dear TEFL instructors. I took over classes that other teachers were subbing and arrived weeks after the term started. Work is too much, but the pay is great and I’m hoping things will get easier. They have to, right?

I’m also slowly starting to get our apartment comfortable, going shopping when I have free time, but we are still living out of our suitcases since we don’t have any shelves or places to put our clothes. I’m playing catch-up and settle down, getting adjusted and oriented every day. I’m taking more naps than in childhood I’m sure.

Last weekend the power was out all day Saturday due to city work and this weekend has been invasive traditional Cambodian music, monks chanting and lecturing at the Spinal Tap volume of 11, starting on Saturday around 8am and going on until the evening, and today starting again at 6am. It appears to be only happening in our neighborhood due to a funeral. I’ll quote my b/f on this one, he said, “It would be an interesting cultural experience if it wasn’t so abusive.”

There is still so much I haven’t shared, but I fear I am taking for granted your good time. So let’s end this update with food because the food has been a pleasant surprise. Before arriving, I was somewhat afraid of what Cambodian food would be like. After all, Thai food is world-renowned, but whoever said Cambodian food is like a mix of Thai and Vietnamese knew their cuisine. I like Cambodian food. It’s flavorful, and I love the French influence – crusty baguettes galore!

Siem Reap also has a wonderful variety of Mexican, French, Italian, Korean, Japanese, Thai and Indian restaurants. I’m excited to try a new restaurant once a week even though we have discovered our Cambodian favorites. I love to eat, and the Italian pizza we had the other night was exquisite, easily one of the best I’ve ever tasted.

I’m not losing weight despite cycling to work because, surprise, the portions are hearty here. Even the local food is a generous plateful, so I don’t know how the Cambodians manage to stay so fit. I’ll write more as soon as I can. And yes, I’m getting tanner. xxoo, Lani

83 replies on “First impressions on living in Siem Reap”