What is trendy? What is popular? I seem forever behind in these things. My excuse is I was born and raised in Hawaii, and it was the running joke that if something was in fashion in say, late 1989, it would hit the islands a year later or maybe in 6 months. In other words, what might be going out of fashion on the Mainland would be coming into fashion on the islands.

Although, to be fair, I’m a good observer. This just means I notice things other people don’t, but not in a “Jason Bourne” kind of way, more like in a “hey, teenagers are flipping their sweatpants waistbands out” kind of way.

But I do find trends fascinating even if I consider myself anti-trendy.

Look, I’m 40, and I have no business or desire to act or look “oh she’s trying too hard to be _______.” That would be pathetic. Instead I hide my shame behind my laptop, googling Top 20 videos and songs.

Maybe it’s because I’m part of the MTV generation. I grew up watching this TV channel with utter and complete devotion. Or maybe it’s because I listened to Casey Kasem in the car, and waited to hear what each week’s number one song was. I don’t know. Lord knows I don’t generally like pop music. And yet, it’s interesting to learn or see what is considered trendy, in fashion, and popular. I see it as taking a look at a friend’s music collection, or book shelves, or bathroom.

Whenever I visited a friend’s house for the first time, I would open their fridge. It seemed to be the safest and most blatant way to be acceptably nosy, but like, still get to see stuff. With music and books, you can have stuff that you haven’t even looked at or listened to, but with the fridge, you can see how someone lives.

And isn’t that why we follow celebrities or bloggers? Isn’t that why we love social media? We want a glimpse of the fridge. Some purchases are constant, consistent and everyday cravings, while others are new things we are trying and testing out.

So if Chiang Mai had a “fridge,” what would be in it? Glad you asked. Here are a few things currently on the shelves.

#1. Noodles. Oodles of noodles. My students, heck my cousins, can’t get enough of gŭay-dtĭeow (ก๋วยเตี๋ยว). Whenever I cover the topic of trends in my classes, you can be sure noodles will be under food trends. Chopsticks down. Guaranteed.

Drinks, not just coffee, iced coffee, used to be served in bags. But I hadn’t seen this “style” since my visit back in 2007. Or at least, I hadn’t noticed. Although at the end of 2013, I noticed one of my trendy Thai co-workers sporting the above paper bag within the plastic baggie coffee drink, and I thought “Ah-ha!” a new twist to an old idea.

#3. Shaved ice. First of all, I’m not talking about Hawaiian shaved ice. When my sweet friend, a Chiang Mai resident since birth, told me about this Ice Hub shaved ice, I was not as excited as she was. I’d had Hawaiian shaved ice as a child, and as I grew older I found it disappointing in comparison to ice cream. (I know, I’m a horrible Island Girl.)

But then I tried this concoction Thais are crazy for – and it’s AmAzInG. Instead of feeding ice through the shaved ice machine, I believe they put in milk, creating a fluffy and light ice cream texture and flavor. Top it off with mango or bananas or chocolate and you got yourself a honest treat.

#4. Graffiti. Over the years, I’ve noticed and enjoyed some of the more creative art work I’ve seen around the city. 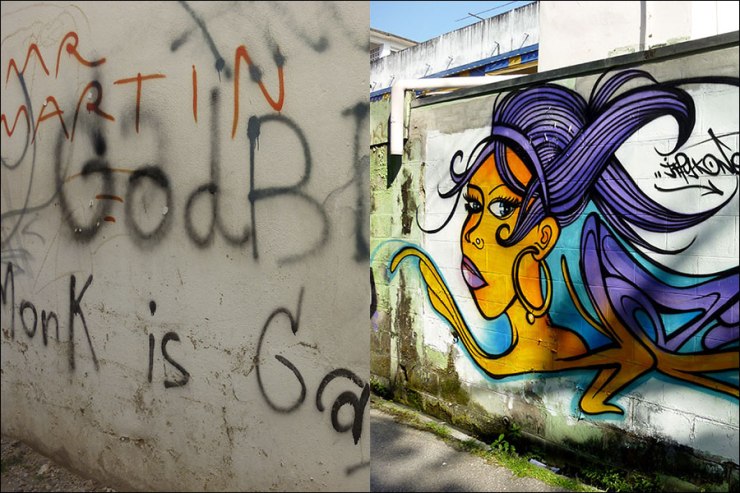 But lately, I feel the ugly graffiti, the simple “tagging,” and the horrible SY signature that is everywhere has  brought down the charm and beauty of Chiang Mai. If you walk around the Old City, you see graffiti almost everywhere, and no one seems interested in cleaning it up.

But I have seen one paint job cover up off of Tha Phae Road, and it looks so much better even though they painted over a cool looking robot. I don’t mind graffiti art, but I feel like it needs to actually be art, not simply random spray paint. Why not paint the walls beautiful colors? Or invite talented artists to showcase their work?

#5. More policing. In an effort to enforce the law, CM police have redoubled their numbers and ticketing. I have watched more police checkpoints spring up around the city pulling folks over for not wearing a helmet or not having a driver’s license or whatever. I know during the holidays the police were attempting to reduce drinking and driving, so I guess they were taking an aggressive approach.

While they are at it, I’d like them to ticket those who park on the sidewalk, repaint the crosswalks, and video tape drivers who fail to yield to pedestrians and fine them. I mean, if traffic is becoming such a problem, then why doesn’t the city try to make it more pedestrian friendly?

#6. Pets in sweaters. Something about the weather turning cold makes Thais want to put sweaters on their pets.

Super cute, but I wonder if Thais know that animals can handle the cold better than us. I think this trend of better pet care will continue to grow in popularity as pet accessories and toy dogs have become more prevalent in Thai society. Let’s hope so.

The interesting thing about working with high school and university students is I get to see what they like, listen to, buy, and bring to class. I’ve watched the glasses trend with envy, seeing how the right frames transformed faces – particularly one of my younger teenage students – giving her a really unique flair.

Eventually I broke down and bought my own (not above). It was time, after all, I hadn’t bought new glasses in about 10 years. The pink ones above are just for fun – a prop for class.

I shop at Warorot market regularly. And I would pass by the above kiosk when it was devoid of customers. I thought the look was intriguing enough, but I didn’t need another outfit, so I’d just slowly walk on by contemplating a purchase. Then I heard from one of my students that this particular look was in style. No surprise as I had started to watch the above vendor grow in popularity. These days she’s always busy.

Then I saw 3 young blonds walking by in these kinds of shorts. This trend hit the tourists! I saw where they were selling them, and for this blog post I decided to treat myself to this “very Thai” look. But when will I ever wear this again!? 😛

Okay! It’s your turn. What’s trendy in your city? 😉 Have fun!