Right now life is about keeping nature out of my house. There is a large frog or toad (No, I won’t google it.) that keeps coming into the house. The first time I saw him was behind the dining room table. He was facing north so I thought, Okay. Good feng shui, I’ll go with it. Plus, I was too tired.

Second time, I almost stepped on him. He didn’t feel like the cat and when I turned on the light, there he was. I did manage to capture him in my dirty laundry and throw him out which is why I wondered how he managed to get back in again. Doesn’t he get the hint?

There is also an insane amount of ants that keep climbing around every crevice and corner. I discovered them in the kitchen on the ceiling after I had done the kind of deep cleaning that you do when you are getting ready to move. They like the upstairs bathroom, living room and outside where I walk and they bite! Then last night I saw a line of them from my bedroom to the bathroom.

As I was heading back upstairs for bug spray, a large spider greeted me. Now, I’m used to killing spiders because I’ve had to become accustomed to them enjoying my bedroom. But this guy, this guy made me gasp. In these situations I’ve learned that the shoe is the best weapon.

Also, a couple of times after I have taken a shower I’d grab my towel only to find a large lizard ka-plunk on to the floor. He doesn’t bother me though. I know his days are numbered with the cats in the house. Then today, after work, I saw a different colored, oh I don’t know 12 inch lizard chillin’ in my bathroom sink.

You see, expats go through these cravings, not unlike a pregnant woman, craving all the things they normally would not. That is to say, they crave McDonalds.

My friend and I were near the McDonalds (with a drive thru!) when he decided he must have a Big Mac. We discussed how we do not eat McDonalds when we are in the States but here!? it’s a novelty and a half, with the taste of french fries hitting the home run.

Things that we took for granted, things we didn’t even like, are infused with the fresh scent of I WANT IT. So, it’s interesting what we can do without and what nibbling pleasure we can get from ordinary and previously repulsive things. ..just because the mind recognizes it.

Equally fascinating is if Thailand, Chiang Mai suddenly was inundated with all the fast food and chains that we “missed” from back home, Chiang Mai would cease to be so Chiang Mai. It would look like a city trying to be American, and I wonder after the fun of that wore off, if expats would just start to resent the presence of Big Business?

Places, cities, towns, countries, should be unique. One of the things I started to notice about towns back home were the lack of mom and pop stores and the profusion of brand names and lack of character. I’m not ready for that to happen to Chiang Mai.

Don’t get me wrong, it’s great finding those products from home. It really is. And I enjoy fast food like anyone else from time to time. I’m sure psychologically there is an explanation. I mean I’m enjoying the teeny bop TV show Glee and mainstream music which I’m sure is my way of regressing and progressing in my life as an American abroad.

But I have no desire to move back. I just need a McDonalds “quarter pounder” and fries occasionally to remind me of the place where I grew up and then I can motorbike home to my cabin in the bamboo woods. 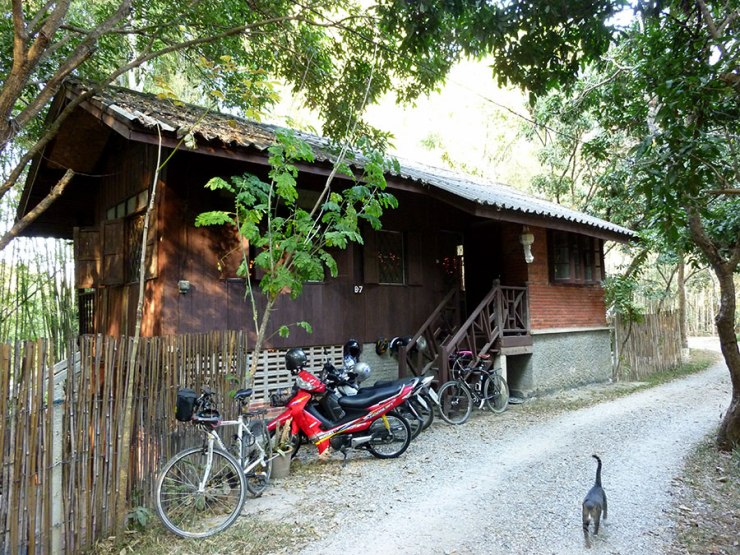 11 replies on “The McDonalds Factor”