🇹🇭 Can you cook Thai food?

Upon learning that I am half-Thai, folks want to know, “Can you cook Thai food?” When I was younger, the answer was no. As in why on God’s green and blue earth would I want to? My mom can cook wonderfully though, thank you.

As I got older, I became annoyed by my mom’s badgering.

“She can cook Thai food.”

We were at another Thai temple/fundraising/holiday function. The girl in question had her head down, dutifully cooking.

I wondered if I should feel competitive towards her. I think at the time I just wanted to hate her.

“That’s nice.” I said while I scanned the horizon for something to eat.

But eventually I did cave. While I was in college, I realized that I missed my mom’s cooking (and Hawaii’s amazing diverse Asian cuisine). So I learned to cook from cookbooks, then websites, and magazines.

My brother gave me a Northern Thai cookbook many moons ago. He was much more culinary than I ever was. I attempted a few stir fry dishes from the book and was successful. Then I looked more carefully at who the author was because he obviously knew what he was doing. When I flipped through the colored pages, I also recognized that this was food my mom made or ate. Larry chose the book well.

And then, I called my mom and asked her how to make Thai red curry. Of course, I tried to visualize it first, like recalling memories that happen so often you forget the details. Then I tried it and I continued to play with the recipe for years. I would vary how much curry paste or coconut milk to put in. In the States, Thai basil was hard to come by so Italian basil had to do. I did vegetarian versions often and I began to experiment with sweet flavors in the spicy sauce.

But if I’m honest I felt more proud when I pulled off a French Silk Pie or created my own pie dough from scratch. It was much more fun to learn to bake and become a pretend expert baker having never grown up with baking in my own family. My mom used the oven to store pots and pans and maybe once a year roast a turkey in it.

I appreciated the warmth the oven gave off in cool Colorado or Oregon winters. Betty Crocker became a friend that I could trust. I felt American when that was not something I was consciously aspiring to.

Is it true that we’re attracted to what is different?

When we were in California, at a Thai restaurant in Oceanside, I remember when my then-BF asked the waitress how she made such a great sauce for the eggplant and minced pork dish. She brought out the cook and so he asked her how the dish was made. The cook stared at him and back at me, confused.

Then she pointedly said to me. “Don’t you know how to make it?”

Feeling put on the spot and a little ashamed, I responded, “I could probably figure it out.”

Somehow I manage to fail as a Thai person to both sides of the spectrum. 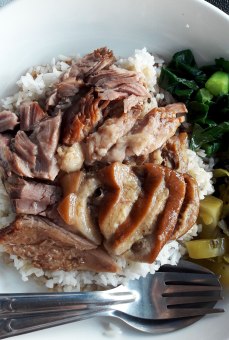 When I moved to Thailand it seemed ridiculous to cook Thai food at home when cheap, quick, and tasty Thai dishes were ubiquitous.  I began to appreciate that certain places only served particular foods, like khao soi, Pad thai, or noodle soup. Food is also regional which I think we have a tendency to forget.

Besides it’s a rare bird that can cook everything well. Usually, we gravitate towards a particular set or menu anyway, whether it’s stir fry dishes with rice or noodle dishes.

I can think of many friends who complained of having the same foods rotated throughout the week: Sunday leftovers, spaghetti on Wednesday, and meatloaf Fridays, and so on.

Interestingly, when it came to Thai, I cooked stir fry dishes with rice or curry. I love hot rice. I’m a little odd this way as many Thais prefer noodles.  I think they have gotten sick of rice because they have it all the time, sort of like bananas, lots of Thais hate bananas, too.

Luckily I’m with someone who can eat both Thai and Western food. I say this because some expats prefer to eat their own food more often than the local fare. I grew up with both, so I’m not one of those people who say, “I never feel full when I eat rice” or “I could never eat just bread and potatoes”.

Do you cook? What do you like to make?