Penang Malaysia was one of those places that I constantly heard good things about, but never had made it to. But this year, I set my jets to see it. I planned months in advance to get a good ticket price and timed my hotel reservations, too. I’m so glad that I did. Penang is worth it. 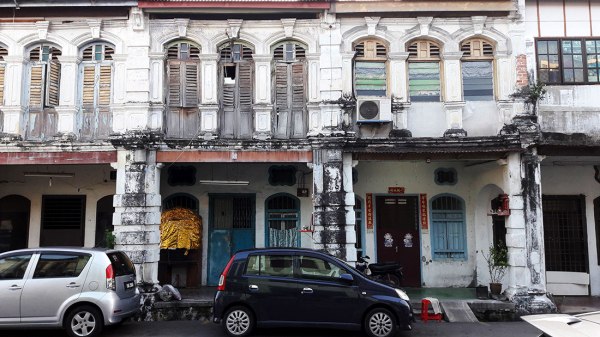 We arrived in the afternoon and soon after checking in, we went in search of a money exchanger and food! Malaysia is well-known for its amazing food due to the mix of Indian, Chinese and Malay cultures. Luckily, we stumbled into MonaLiza and had excellent curry. Malay curry is different from Indian or Thai curry, but I’m no curry expert. It tasted though distinctively different and it was so good. In fact, we stuffed ourselves silly and that would be the theme for the rest of the trip.

Then we discovered the Komtar mall complex (3 malls, anyone?), and I have to warn you that we spent a lot of time there. Siem Reap, where we live, is seriously lacking in glorious Asian shopping malls. In America, malls are considered dead, but in Asia, they are free air con paradises, entertaining places to shop, eat, do stuff like laser tag or ice skating, catch a movie, and basically have a nice time.

And part of the reason why I planned this trip was to do some basic clothes shopping. I was a woman on a mission.

I was eager to see the street art since that is what Georgetown seems to be best known for, after the food. We headed in the direction of where most of the art seems to be concentrated and enjoyed the historical aspect of the city. 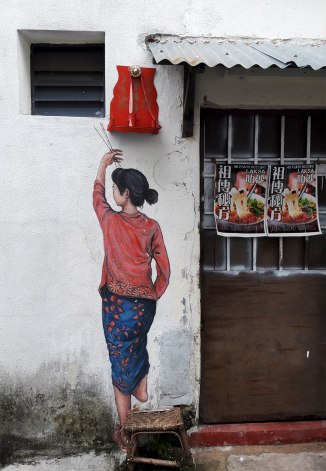 It was a pleasure to see old and new mixed together, and the best of development working together especially for a SE Asian country. We were so enamored with this that the bf wrote about it here.

After a cheap snack, we strolled around Cheah Kongsi, one of the oldest clan temples in Georgetown.

And at the recommendation of our guesthouse, we went to the fancy new Gurney Mall via bus, where I started to shut down from lack of food. One of the things I hate about travel is figuring out where to eat, what to eat and eating at strange times. Now, Georgetown was a delight in this respect, but trial and error on holiday kind of sucks because you want everything to be perfect, right?

We decided that the hotel breakfast was pale and tasteless in comparison to all the incredible food that’s in Georgetown so we wandered just a bit to find a hoppin’ dim sum place.

Fortified, we then hit the beach! The bf wanted to check it out so we hopped on a bus to Batu Ferringhi. Apparently, it’s better at night with their street market, but I’ve seen enough street markets to last me for the rest of my life, thank you. Oh, get off at the Holiday Inn because that’s basically the beginning of it and if you aren’t careful, you’ll miss this little town completely. We got off at the last stop only because we asked the driver and then walked back.

About half of our walk was on the beach, collecting shells, taking pictures and just enjoying a quiet beach experience which neither of us has had in a long time.

The other half was walking down the main road which wasn’t exciting except for the art gallery where we found a wonderful buffalo print which we promptly bought for $10.

The day ended with high end Indian food that was – pretty damn tasty. (*Sorry, no picture, I scarfed it down too quickly.) 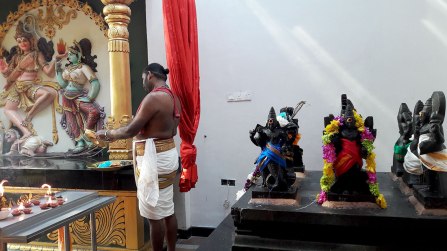 On the 4th day we wanted to see this Indian temple on the map and the clock tower near the water. It was a day of more walking, sightseeing and exploring areas of the city we had not seen. 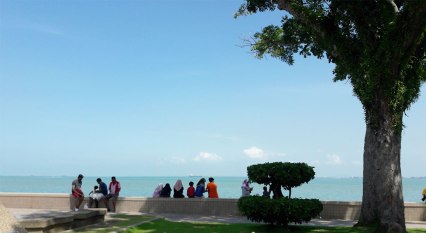 We then spent the afternoon back at our favorite mall, going back to the things we had seen that we wanted. Which was interesting because the things we were initially crazy about were not so interesting anymore. Really, there is such a thin line between snagging something because you’ll never see it again, and taking your time to see if it’s something you truly want and need.

We were getting close to ending our beautiful vacation, so we decided to write a list of all the things we wanted to do and assess what was doable, especially since we wanted to avoid the weekend crowds. There really is so much to explore and see and we didn’t come close to seeing it all, but that’s okay.

With that in mind, we went to check out the ‘must see’ Kek Lok Si Temple which boasts being the largest Buddhist temple in Malaysia.

The bus ride there was easy peasy, finding the bus back, however, was a hot endeavor. Thankfully, everyone is helpful and nice and we avoided a meltdown in the middle of our travels. Actually, it was a little tricky finding the entrance to the damn place, too.

I suppose the problem is you are dropped off in the middle of a busy street filled with shops and street vendors. We turned right, the direction of the temple, but then ended up, oddly enough, going through a neighborhood and people’s yards (so to speak) before finding this hidden entrance which led you to the temple.

The complex is also filled with hawkers and stalls trying to sell you clothes, food and trinkets. If you’re not to use to this, it seems bizarre, maybe even disrespectful, but it just seemed so – Asian. The various religious ‘areas’ were interesting though. It’s very colorful. A little confusing and hot and crowded, but all in all, an alright trip. We probably should have explored the food stalls in town, but by the time we went up the tram to the top and climbed a gazillion stairs, we were ready to be in the blasting cool air of the bus and sit down.

The evening was rounded out by two dinners. One as soon as we got back from the temple at Food Architect since it was obviously trendy with young Malays, we were curious. And then later at Kapitan for Indian food.

At Kapitan, my meal was fantastic, like off the charts good, but my bf’s food arrived much later than mine. It was disappointing because I saw all the plates piled up and ready at the window to be delivered for about 15 minutes. So, the service sucked. Yes, it was busy. Everybody ate with their right hand. How they do it, I’ll never know.

Little India is fun to walk through at night. We loved the music playing and feeling like we were in India!

Luckily, we ditched the expensive coffee place we had been going to, and discovered Trois Canon Café, a Hong Kong style eatery with amazing fried noodles, bagels, coffee and tea. We ate there the next day as well. I miss the Indian food and this place, the mostest.

Next up was the Botanical Gardens. Unfortunately, we spent a long time waiting for the #10 because we didn’t know how often it ran (every hour). And on the way back, we had to wait again, but at least the driver dropped us off at this little shopping area so we got ice cream and chillaxed. I think because these delays happened at the end of our trip, it helped me to be perfectly okay with it. I don’t know. Maybe this is part of travel and just going with the flow.

The gardens are free! And truly a joy to walk around. I really love parks and green public spaces.

On the way back, we walked through the mall, but really we were thinking of those lovely massage chairs you put money in, and wanted to get our cheap massage. After a shower at the hotel, we were out again, trying to find dinner. Monday was a deadly day, as was the hour, 5pm. Most places were closed. But since the city is quite compact, we found “Beans Heritage” off of the Armenian Hotel and I had the cheesy rice curry which was yummy and it has inspired me to try to make it at home.

For our last day in Penang, we decided to try to see any more street art that we had missed and check out the famous clan jetties. The Chinese clan jetties are neighborhoods on the water, but are some of the oldest settlements on the island that date back to the 19th century and is also a UNESCO World Heritage Site. 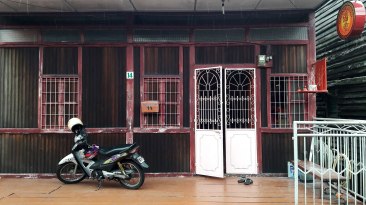 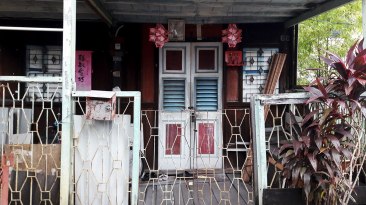 We tried to go to the pier, but it was closed. Then we walked over to this aquarium that we had found online, but disappointedly learned that it had been closed for several months. But we made the best of the situation by walking around and enjoying new sights, and getting our hands and mouths on more food.

We miss you Penang!

Have you been to Penang? What are your tips?

29 replies on “7 wonderful days in Penang”