How much space do I really need? (moving sucks)

Our biggest worry when we moved into this apartment was space. Will we have enough? Where was everything going to go?

We were moving from a two bedroom to a one bedroom apartment. And even though we had to admit, our two bedroom was filled with wasted space, we still fretted. As it turned out, we were able to fit everything into our one bedroom with no problem. (But what a moving day it was! We picked the rainest day possible. Flooding in the streets and all! Exciting!)

As American expats living in Asia we already had undergone the colorful adjustment of living in smaller spaces. I’ve heard friends compare apartments here to hotel or dorm rooms back in the States. Now, we aren’t living in Hong Kong cage homes or cubicles, but it’s safe to say that we hail from the land of the largest living spaces in the world.

Although, I know NYC has some crazy tiny apartments. My theatre friends had some claustrophobic stories of sharing space and existing in micro-conditions. Something about sitting on the toilet and stretching their legs and they’d be in the kitchen. Oh, and my friend M, lived in this weird constructed wooden bunk bed space within an apartment living room.

Generally speaking though, moving from America to SE Asia meant experiencing a big change in creature comforts and your escape-space. Typically, an apartment here is a studio apartment. And I’ve lived in them all: studios, one + two bedrooms and even a house. It’s rather amazing to see how couples squeeze into studios or even families in small spaces. (Back in Hawaii, we used to joke about extended Filipino families existing under one roof – insane! But not really considered the price of rent in Hawaii.)

It’s good to see then that this minimalism trend has taken off because with paring down unnecessary junk, comes downgrading from larger homes to more modest spaces. You know, I can’t see the appeal of living in a 4000+ square foot home. Sure, you feel rich, but whenever I’ve been in large homes I just think about all the cleaning (because I’m a cleaner) and my eyes roll back – then I faint. And I’m way too private to have someone clean my home for me.

Even my mom (who cleaned hotel rooms) urged me to get a cleaner when I lived in my “cat cave house” in the bamboo woods. I couldn’t. I suffered through sweeping all the leaves on the back patio I never used and scrubbed it Cinderella-style after the rainy season slime took hold. And even though I bought a vacuum to deal with the cat hair (and ants!), it was a lot of upkeep.

Our latest place is an incredible time-saver when it comes to cleaning. I hardly have to do anything now. My procrastinating days are dwindling down!

But I think another deal sealer has got to be the $$$. Normally, you save money when you move into a smaller space. And since we were so worried about this space, I converted the meters to square feet to discover we are roughly in a 500 sq. ft. apt. We don’t have a large deck or patio, but the balcony is large enough for a couple of chairs to look out and for our love of plants. The deck wraps around to the front door and because we are on the second floor, we get to watch the sunbathers by the pool in neighboring hotel. Peeping Toms!

I feel like it’s my reminder that we live in a tourist destination. Seriously though, I think the lanai (Hawaiian word) helps the space to not feel boxed in. As does being a block from the river. I suppose that is how those city dwellers make do, they get out of their shoebox apartments and take in some wider spaces.

It makes me appreciate how the other half lives though. I’ve been in enough apartments where I’m looking down at said-shoeboxes marveling at how little they can get by with. All of this is interestingly made bearable by technology. I mean, how much space do you really need to use your laptop, smartphone or watch TV?

When I lived in the States and we would take our evening walks, one of my favorite things to do was look in those glowing windows to see what families were up to. Space has tendency to dictate how we spend our time and with who. It can bring us together or give us our personal space. 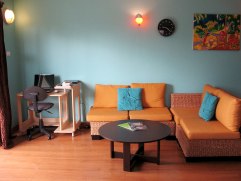 How much space do you need?

48 replies on “How much space do I really need? (moving sucks)”