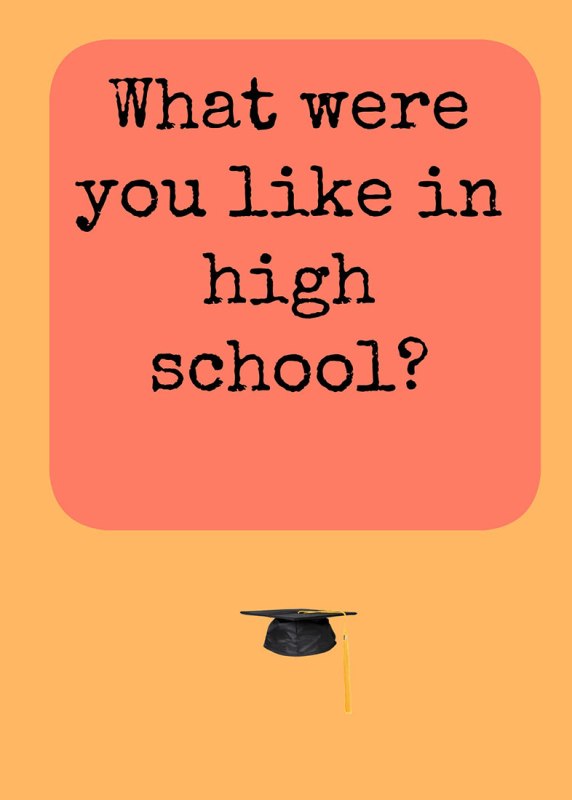 I hate to say it, but I’m fairly certain I was an obnoxious little snot rag, and not the embroidered handkerchief-kind. Now, you might be thinking, “Oh, no, Lani, you were a darling little angel with cute little wispy pigeon wings!” But I assure you, I was more like the disgusting distastefully-colored droppings pigeons leave behind.

Why are you being so hard on yourself, Lani? (And why are you talking in third person, ya nitwit?) Well, it’s like this. I talked back, threw crumbled up paper behind the teacher’s back, cheated, skipped school, failed P.E. from “lack of participation”, put my makeup on during English, had to go to summer school for being a lazy, fell asleep in History (drool much?), swore vigorously and profusely, and considered high school to be a colossal “Why is there celery in my food?” waste of time.

On the other side of the paper bag-covered book, I was into rock music, reading, magazines, writing really profound and poignant things like “love is an illusion,” and theatre. And here we have what saved my high school years from being utterly useless, stupid and filled with teenage angst gooey goodness.

I don’t know if I would have even considered taking theatre if it hadn’t been for my brief touch with performance and fame that I experienced in the 8th grade. We were living in Barstow, California (remember, the armpit of America) and at the time, my bro and I were attending a Christian school. We were reading Exodus, and learning about Moses and the Israelites high-tailing it out of Egypt after all those nasty and rather excessive plagues descended upon Pharaoh and his people.

So, our teacher gave us the assignment of presenting the parting of the Red Sea, the great escape of the nice and previously-enslaved Hebrews, and since this was the first and only creative writing assignment I can remember ever being given at this school, I was eager to get started.

Lying on my stomach on my mother’s bed, with pen and paper, I decided it would be fun to present the dramatic parting of the Red Sea as a news reporter. I would be Lani Cox for Eyewitness News capturing on camera the exciting event as it happened, and even grab a quick interview with Joshua, who I fancied to be a hottie.

I was really nervous about someone having the same idea. It seemed obvious and if I had to go after that person, it would have really sucked. Sitting at my desk, waiting was sweaty and agitating. Finally, I just decided to go and my classmates loved it. In fact, when the principal walked in, they wanted me to do another performance just for him. (As if…)

But I was asked to do another performance for some other competition, and my performance was flat-footed as I feared and anticipated. But the experience provided the turning -on-the-light-bulb moment that made me pursue theatre. While I was still in California, I was considered one of the rising stars full of humor and lacking of shame. Although, by the time I returned to Hawaii, the school I transferred to didn’t have a theatre program or even a drama class, so I had to wait until I transferred again to my hometown school. (Yes, I attended 3 different high schools my freshman year.)

When I finally did see what a full-scale high school theatre program looked like, I knew I couldn’t compete with the big stars I saw on stage. It wasn’t that I was intimidated, it’s just I knew I didn’t have that passion and drive for it.

I joined the program nonetheless, and it was rewarding, serious work and it made my last two years of high school worthy of something. I think it kept me out of trouble, too. What made theatre great, was being funny, being part of a dynamic group and making lifelong friends. After high school, my fellow thespians pursued degrees in theatre, moved to NYC, or in some way stayed connected to theatre.

What amazes me is how practical I was in this regard. I knew I didn’t have the right looks and I didn’t want to go through the endless rejection and struggle. Again, it’s not my passion, and I didn’t think I was good at it. It seemed vain which is super hilarious because eventually I settled on writing, blogging and writing memoir – talk about endless rejection, struggle and “vanity”.

So, I was part of this quirky theatre crowd and as a result, I felt loved and that I had every right to exercise my insufferable teenage self. Whenever I’m briefly disturbed in a restaurant or a mall by a gaggle of loud teens, I’m reminded of the girl I once was – full of sassiness.

Theatre provided stability, a creative outlet, really great friends, and structure in contrast to my home life which felt hostile, failing and distant. I also had inherited my mom’s old Isuzu Impulse and this allowed me sweet freedom and independence. For as much as I felt my family wasn’t there for me, they did at least, trust me with a car and was loose with curfew.

They didn’t have to be strict because my friends’ parents were strict and I was usually one of the designated drivers, so I was home soon after them. High school was driving around with a really killer sound system my stepdad put in, my Nike shoes, my acid-washed demin jacket and a lot of hairspray.

What was I like in high school? I was a theatre geek, an obnoxious nerd and an insecure wallflower. I experienced such a range of friendships, schools, acceptance and rejection that I feel I can safely say I understand high school.

28 replies on “What were you like in high school?”