Wow. There is a lot of conflicting information about the Black House/Museum in Chiang Rai. I almost hesitate to blog about it lest I add to the misinformation in English. First up, is Thawan Duchanee who built the Black House, the teacher or the student of White Temple artist, Chalermchai Kositpipat?

I was told Thawan Duchanee was the teacher, but so many bloggers are saying the exact opposite. What’s interesting is I can’t find any credible source to confirm either role or any kind of relationship beyond both of them are from Chiang Rai. Although, I did read in the comments section, of a popular magazine site (from what appears to be a Thai person), stating what I was told: Thawan was the teacher, and Chalermchai was the student. But the comment has not been addressed or noticed.

Thawan Duchanee is 16 years older than Chalermchai Kositpipat and given what I know about Thai culture, and the respect paid to elders, I had a hard time believing the White Temple artist was the teacher to the Black House creator.

So, I decided to ask my friend, who had lived in Chiang Rai for 30+ years, now lives in CM, and is very much dialed into the artist community here, etc, etc; she is a very credible source and here is what she has to say:

Neither Thawan Duchanee nor Chalermchai Kositpipat have ever been teachers or professors. Both have always worked as freelance artists.Thawan is a generation of artists before Chalermchai. [The Black House] is his home, the first buildings date back to the late 70s. Thawan has always said he has no “students” or “luk sit”. Chalermchai began the temple project around 20 years ago after his religious/spiritual paintings became very popular. This said, they have employed many local artisans who call them both “teacher”. Chalermchai and other artists in Chiang Rai call Thawan “I” or older brother.

But what about the “rumor” that the White Temple is built exactly the same distance as the Black House is from Chiang Rai’s city center? If this is true (good luck with Google maps), don’t tell me this was a coincidence??? It seems deliberate, doesn’t it, to have each complex opposite from the other, both in distance – and color, as everyone likes to point out. Black, white, heaven, hell, dark, light, blah, blah, blah.

So, my research led me, not only to the confusion over the artists’ relationship, but also this idea of what the Black House represents and means. For example, I read these kinds of things on various sites: The Black House is not a spiritual place. Don’t call it a temple. It’s a response to the White Temple, a counterbalance to Charlemchai’s “heaven,” and so on.

According to a Time magazine interview,

“The Black House evokes the past Thai civilization in a contemporary manner,” says Thawan. “I try to bring the spirit, heart and soul in their life [into the pieces].”

Hmmm, sounds spiritual to me. But the interpretation of art (and architecture, in this case), is personal, and regardless of the artist’s intent, the viewer sees what they want to see, and shares what they have learned. The Black House takeaway for me isn’t the art itself, but what everyone else has infused into it, and hyped it up to be.

Well, wasn’t expecting horses, I can tell you that much!

Inside the main house…

Can you see the guy? Yeah, it is a massive structure. 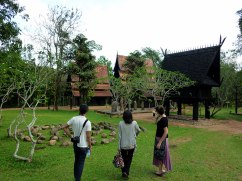 And the grounds are well-kept and intriguing.

Yes, that is a snake! What a beast!

Honey, how was work today? Oh, you know, the usual… 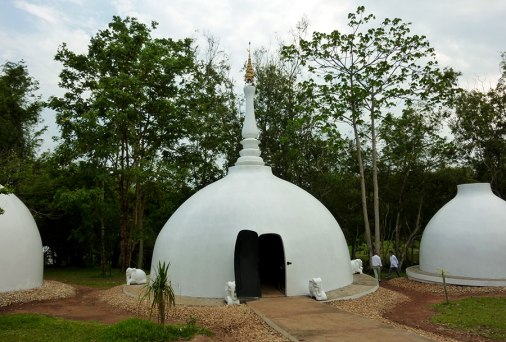 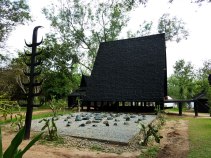 For more information, visit Thawan’s website. I think his creation is worth visiting. Most folks visit the White Temple and the Black House together, but for us, we visited the day after the earthquake, so the White Temple was closed. (If you have young children, I would not bring them to either place, but hey, that’s me.)

It’s worth mentioning that the Black House is not an easy place to find, and I would recommend using/hiring a car or driver. By motorbike, it might be challenging, especially if you miss the turn, you will be either driving the wrong way on the superhighway, or constantly making U-turns to double back. This is Thailand where signage changes, and roads are under, what seems, constant construction.

You’ll also see that Thawan’s gallery is also on site, and a few snacks are for sale. But for a proper meal, I have a couple of recommendations which I’d like to blog about later. I’ll update this here, too. Oh, the beauty of the blog!

22 replies on “The Black House Quandary in Chiang Rai”