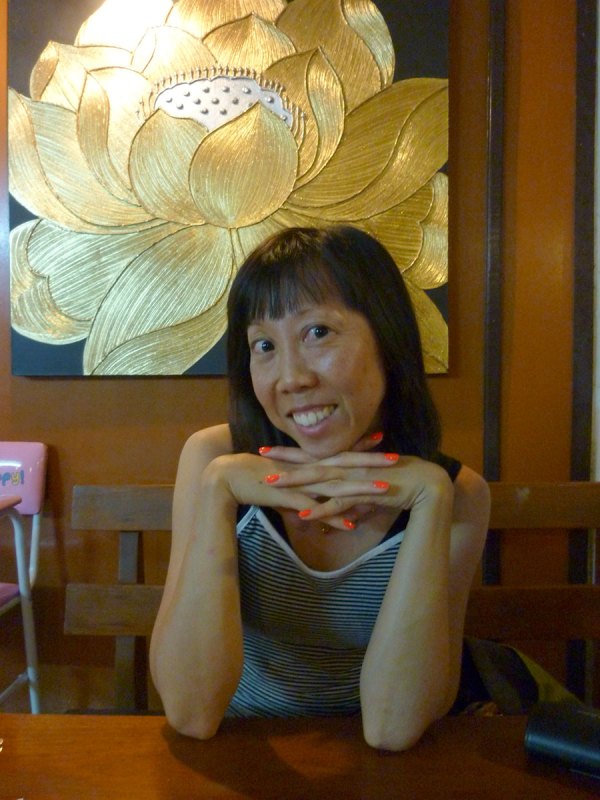 It began with nailpolish.

I walked into my Saturday class and was quickly engulfed by the word, “Raang!” from my J or junior students. They were shouting, pointing and generally excited as I expect from my 13-15 year olds. But after a few seconds I understood they were talking about my fingernail color.

The polish that generated so much attention was a bright coral or red color, so I slipped off my shoes to show my class my retro green toenails. Yeah, that’s how I like to roll…I’m a bit of a ham bake.

So during the break I asked one of my co-workers, “What does raang mean?” He chuckled, looked a little excited himself, and wanted to know why, so I explained the incident and showed him my nails.

“Hmmm. Depends, from your students, I’m sure it was.”

He was having a hard time trying to think about how to explain this word.

I watched this infamous playboy who has been living in Thailand for 10 years (?) shift his weight and hem and haw until finally he offered this example, “If you came in wearing a spaghetti strap dress, that came up to here,” he indicated the length, “I would say, Raang! You’re looking raang!!!”

“Okay, okay.” I laughed. Secretly I was more fascinated with the way his eyes looked me up and down and I began to understand a little of the charm this player possessed. He knows how to flatter a woman.

Days later, during coffee with a friend, she made a remark about my nails and so I told her the story of the word, raang. She laughed, “Oh yeah, my students say that all the time.”

Now she’s a Chiang Mai University teacher who has been here for about 3 years. She doesn’t speak Thai but the best way she explained it was, ATTITUDE.

Finally I was able to ask my Thai teacher who is my age and originally from Lamphun. I think this is important because I remember saying the word sut yawt to my landlady (whose social circle was foreigners and professional Thais) and she had no idea that I was saying, “cool” as in coolio, be cool, that’s cool, etc.

Again, I was greeted by the same “hard to explain” look as I watched him make a face. Then he said, “Hits you”.

“The color of your nails hits me…when something hits you.”

“If your friend asks, “How many months pregnant are you? And you are not pregnant, you can say, Raang! Her words ‘hit you’…”

I laughed, “Too strong, too much.”

Of course, I didn’t think to take a picture of my awesome nail color otherwise I would load a picture. And I will get a different color when I go again. ..probably something raang.

3 replies on “What does raang mean?”